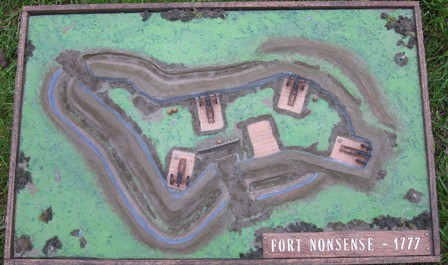 Source: NPS. This model is a theoretical representation of the Upper Redoubt built in 1777 by George Washington’s Army, today this area of the park is known as Fort Nonsense. http://www.nps.gov/morr/learn/historyculture/fortnonsense.htm

Growing up my family would spend most Sundays at my grand parent’s house in Morristown, NJ. The house had an upstairs apartment that my great uncle and great aunt lived in. Just about every week my great uncle would take me out into the woods across the street for a hike and some outdoor activity — I always thought it was to get some of the kids out of everyone’s hair for a bit but looking back I think it was because I liked hiking and being outside and my uncle realized that.

Directly across the street from the house was a wall of rocks that formed the edge of the road and represented the boundary of the little stand of trees that I considered a forest at the time. For that matter, the wall of rocks was probably not higher than 6 to 10 feet but seems three times that in my childhood memory. That wall was where I got my first taste of rock climbing and it was also the quickest route to the through-trail that ran up the hill and eventually connected to the parking area and other trails that wound their way up to Fort Nonsense at the top of the mountain (hill). I would often climb the wall and meet my uncle at the top of it where he was patiently waiting for me having taken the long way around — twenty yards away where the trailhead met our street. Then we would progress our way up to Fort Nonsense and back for an afternoon of adventure.

I am glad I shall never be young without wild country to be young in. Of what avail are forty freedoms without a blank spot on the map?

We spent many hours in the woods and on the trails in the Fort Nonsense area — much of it on private property it turns out. My great uncle would tell stories of the troops that wintered there, of dinosaurs, and of anything else he could think of that captured my young, active imagination. Little did I know at the time that Fort Nonsense and nearby Jockey Hollow were both part of the NPS system of parks. They were the blank spots on the map of my childhood even if they were not remote by any stretch of the imagination.

Visitors can explore Ford Mansion and the Museum or venture outside to Jockey Hollow and Fort Nonsense for some hiking and exploration. There are miles of hiking and horse trails for visitor enjoyment. In grammar school our class took a trip to Jockey Hollow to visit the winter encampment of the Continental Army and learn about the harshest winter of the 18th century which the troops had to endure with only small wood huts for shelter.

Get outside, do and see more, and enjoy the places that move you, Morristown National Historic Site is one of mine.

How the park got its name: Unknown how Fort Nonsense got its name. Local legend has it that Washington set his men to fortify the hill as a way of keeping them busy and warm in the winter. The area was originally referred to as “the Hill” or “Kinney’s Hill” and it wasn’t until the 1790s when it became known as Fort Nonsense.

Things to do: The park offers many activities like exploring the museum and exhibits; hiking, running, or biking the 27 miles of designated, marked, hiking trails; birdwatching; horseback riding on 10.5 miles of designated horse trail; or visiting the Revolutionary War Winter Encampment exhibit.

In celebration of the park service’s 100th anniversary, Jockey Hollow will be hosting over 150 reenactors displaying a variety of 18th century skills and demonstrations during the park’s annual encampment weekend celebration, April 16, 2016.