Last week I spent time in another of our national treasure’s, a park just outside the nation’s capital. This national park is the largest protected natural area in the Washington, D.C. metropolitan region at over 7,700 ha (19,000 acres). I hiked miles of trails and fire roads with our dog, Jammer, went on a perfect trail run on many of those same single track trails and secluded fire roads, explored one of the cabin camps, and visited the new exhibits being installed at the renovated visitor center. Get outside, do and see more, and enjoy the places that move you; Prince William Forest Park is one of mine.

I am guessing that most D.C. and Northern Virginia residents are unaware there is a significant national park just 35 miles south of the city. Prince William Forest Park offers unique overnight accommodations for families of all sizes in 4, 6, and 10 person cabins as well as in traditional campground offerings in two campgrounds, a trailer village for RVs, and a backcountry area for a more primitive experience. The five cabin camps are composed of small, historic, wooden structures with Cabin Camp 3 being the only one available for individual rentals and the others for group reservations. 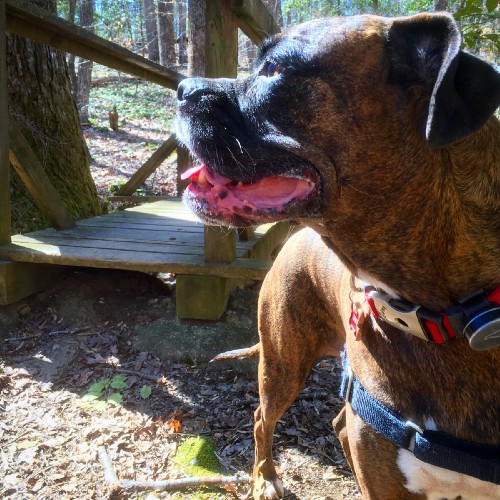 The cabins at Prince William were constructed during the Great Depression by the Civilian Conservation Corps (CCC) and originally intended to provide overnight camping for underprivileged youth organizations. At the onset of World War II the Department of War recognized the value of the cabin camps for training purposes and took over the park. The Office of Strategic Services (OSS), America’s first centralized intelligence agency (yes, the precursor to today’s CIA) utilized the camps and surrounding park lands to house and train operatives.

The original concept for Prince William Forest Park was as one of Franklin D. Roosevelt’s Recreational Demonstration Areas (RDA) which aimed to reuse marginal, overworked land to create a new protected area. People were unemployed and hungry and FDR hoped that by using the CCC work crews jobs would be created teaching workers valuable trade skills and then the RDAs would be used to help the underprivileged youth in the region.

There were 46 such RDAs constructed up and down the East Coast and across the nation’s mid-West. Over 2,000 CCC enrollees came to the area near the Quantico and Chopawamisc creeks to construct the Chopawamsik RDA which later became Prince William Forest Park. Planners wanted the RDAs to be a way that families and inner-city children could get away and experience the great outdoors and hoped the experience would build “a crop of sturdy citizens” inspired by “a close communication with nature.”

During my visit I met two trail runners outside the Turkey Run Campground Restroom. They had been out for 3 hours already and were probably going back out for another hour. The one gentleman told me about 24-hr and 12-hr Adventure Trail Runs (ATR) that are held in Prince William Forest Park on the trails. He said the name of the sponsoring company is Athletic Equation and that they were both training for one of their 24-hr races on May 7th — getting their training done on the actual course, smart. I was intrigued because I love trail running and was aware that it is rare for the NPS to allow sanctioned events on their property. This looks like a terrific opportunity to run a unique event in a national park and I will be looking into it.

The next time you are looking for a recreational opportunity within an easy day trip distance from the D.C. area, give Prince William Forest Park a consideration. I do not think you will be disappointed.

Fee: $7 per car, pay at the Visitor Center